Over 30 million Americans have diabetes, and more than 7 million of them require daily insulin. But the cost of the drug has risen considerably in the last decade. Though U.S. lawmakers are considering policies to address the challenge, not much is known about who is most burdened by insulin prices.

In a new study, Yale researchers provide much-needed data on Americans who use insulin, whether and how they’re insured, and who is most at risk of extreme financial burden. According to their findings, 14% of people who use insulin in the United States face what are described as a “catastrophic” levels of spending on insulin, meaning they spent at least 40% of their post-subsistence income—what is available after paying for food and housing—on insulin.

The findings were published July 5 in Health Affairs.

In 1996, when the pharmaceutical company Eli Lilly debuted its Humalog brand of insulin, a fast-acting type of insulin, a vial cost $21. “Now it costs more than 10 times that,” said Kasia Lipska, an associate professor at Yale School of Medicine and senior author of the study.

And it’s not just Humalog. Insulin list prices, on average, have more than doubled in the last decade. “This is not inflation, there’s much more going on,” said Lipska.

Much of the rising costs can be attributed to supply chains that have become more complicated, researchers said. Each step added to the chain means another entity is collecting profits, leading to higher costs for patients dependent on insulin.

“And we have no reason to believe that will change anytime soon,” said Baylee Bakkila, a medical student at Yale School of Medicine and lead author of the study.

For the study, the research team used data from the most recent Medical Expenditures Panel Survey, which covered 2017 to 2018. They found that nearly one in seven people who filled an insulin prescription in the U.S. experienced catastrophic spending on insulin during that time.

And that’s just what they’re spending on insulin, Bakkila said; the estimate doesn’t include other costs typically shouldered by patients, including other medications, glucose monitors, and insulin pumps.

“It actually underestimates the extreme financial toxicity that these individuals are experiencing because diabetes and other comorbid conditions come along with a lot of other health expenditures,” she said.

Lipska says this was the driving question behind the study: understanding how issues around insulin affordability play out on a national scale. She and her colleagues found that Medicare beneficiaries were most burdened by insulin costs, accounting for more than 61% of those burdened by “catastrophic” levels of spending.

Medicare beneficiaries who use insulin had lower incomes than those with private, other, or no insurance. This fact, combined with Medicare’s insulin coverage limits, makes this group more vulnerable to financial burden, said the researchers.

“If your income is high, you may be able to absorb these higher out-of-pocket costs,” Lipska said. “But if you have fewer resources, it might really drain your resources very quickly and lead to financial toxicity. And a lot of people with diabetes live on very small incomes.”

These findings should help inform policy, the researchers say. One option currently under consideration by Congress is a $35 monthly cap on out-of-pocket expenses.

While such a cap will help some individuals reduce their spending, researchers say, even $35 per month will be cost-prohibitive for many Americans. “It’s going to leave many still struggling and still at these catastrophic levels of spending because the cap doesn’t take into account the resources people have available,” said Lipska.

The proposed legislation also applies only to people with Medicare or private insurance. It would offer no protection for those without insurance, Bakkila notes, and doesn’t focus on the most vulnerable populations.

“It’s a step in the right direction but we need to go further to ensure that everyone has the ability to access insulin,” said Bakkila.

Other policy options that could be considered include list price regulation, Medicare cost negotiation, or innovative drug spending approaches like subscription pricing models, the authors note.

Ultimately, they say, making insulin affordable is better for everybody.

“If we as a health care system make insulin out of reach for people, not only is that ethically wrong, but it’s also going to cost us more in the long term,” said Lipska. “We’re seeing more hospital admissions for high blood sugar emergencies and for complications. We’re seeing more disability and more poor outcomes in this very large group of people. So it’s really shortsighted not to think of it in this big-picture way.”

Citation:
Insulin is an extreme financial burden for over 14% of Americans who use it (2022, July 5)
retrieved 6 July 2022
from https://medicalxpress.com/news/2022-07-insulin-extreme-financial-burden-americans.html 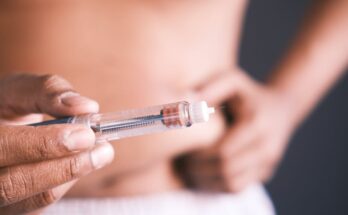