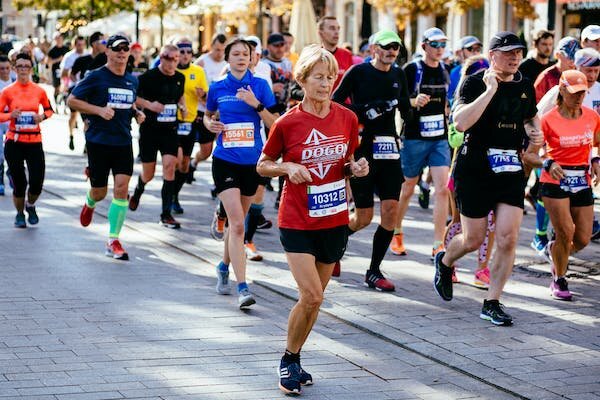 After his world record 2:01:09 run in the Berlin marathon on September 25, the world’s greatest ever male marathoner, Eliud Kipchoge, made a curious observation: “We went too fast, actually it takes energy from the muscles.”

Despite running an average speed of nearly 21km/h—and running the fastest race marathon in history—Kipchoge was saying he’d actually made an error in his pacing. Meaning that, had he nailed his pacing from the start, he may have had the energy left at the end of the race to run under 2:01:00.

One of the reasons marathon world records have seen such big improvements over the last few decades is because of improvements in race pacing. In the past, marathons were run using a “positive split” strategy, meaning that runners would start fast and gradually slow down in the second half of the race.

Nowadays, most professional marathon runners know it’s better to use even pacing (running the same pace through the whole race) or negative splitting (running very slightly faster in the second half of the marathon). Getting pacing right is extremely important and can even mean the difference between placing on the podium or not at all.

While the average person setting out to run a marathon probably isn’t thinking about smashing a world record, knowing how to properly pace yourself could help you smash a personal best during your next race.

When it comes to the best pacing strategy for a marathon, the science is clear—and it may actually be the opposite of what you’d assume.

Most runners tend to start out too fast, which means they slow down as a result later in the race. But if you run with even pacing instead, you’re actually far more likely to run a personal best.

Starting out too fast is a problem because it burns through your body’s readily available fuel reserves. This means you run out of energy quickly and have little left to use late in the race when you need it most.

This is why runners that are more experienced and faster start their race at a more sustainable pace. By starting slower, it reduces the chances of feeling exhausted and “hitting the wall” in the later stages of the marathon. This may mean that you have a bit of energy in those crucial last miles to push for the finish.

Get a personal best

It’s very easy to run too fast in the early stages. This is where a pace plan can help. Prior to the race, use your training times (or even times from past races) to get a rough idea of what sort of pace you can maintain. A GPS device or smart watch may also be helpful in tracking this during the marathon or in practicing it in training.

Your pace should feel easy at the start. If you can hold a full conversation in those first few miles, your pace is probably good for you. Try also not to get too carried away with the experienced runners or too excited by the crowds at the beginning of the race.

Stay calm and try to avoid being overconfident or taking big, unplanned pacing risks, as both have been linked to significant late race slowing. Being aware of your pace is most important in the early part of the race, so once you get to 20 miles you should focus on just finishing as best you can.

Importantly, you should adjust your goals and pacing depending on the weather. In particular, run slow early in the race in hot conditions as late race slowing is often intensified due to the effects of heat on the body’s circulatory system.

The right diet can also be important for helping you keep a good pace throughout the race. Using sports drinks, energy gels or other high-carbohydrate snacks may help reduce the effects of fatigue and slowing in the later stages of the race.

Try to eat small amounts of carbs often throughout the race. However, it’s important to practice this strategy during training to see how your body responds, and know how much you need to refuel during the race.

Pacing can be just as much mental as it is physical. The majority of runners report using positive self-talk as a strategy during a marathon. This may include repeating positive phrases or words in your head throughout the race. Positive self-talk may also be important in reducing slowing and helping you stay motivated in the later stages of your run.

Pacing a marathon is very hard—even the pros don’t always do it perfectly. But if you want to nail your race and smash a personal best then even pacing is the key. Start slower than you feel you should, hold yourself back and reap the rewards by speeding through the final miles.

How math, and eating while running, can help you complete your best marathon

Provided by
The Conversation


This article is republished from The Conversation under a Creative Commons license. Read the original article.

Citation:
How to run your next marathon like a pro—it could help you smash a personal best (2022, September 30)
retrieved 3 October 2022
from https://medicalxpress.com/news/2022-09-marathon-proit-personal.html